Having lived in Spain and then Fiji since I became seriously interested in writing, I’ve never had the opportunity to attend a Literary Festival before. Years ago I was invited to attend the Oxford Literary Festival because I had been short-listed in a travel writing competition. Sadly, it was impossible to fly to the UK from Fiji at short notice to attend.

Now, glory be, a Literary Festival is held annually where I live. I pre-booked several events and I was also fortunate to be offered a chance to read at the Festival through the medium of my Writers Group.

John Banville read extracts from his latest book: The Blue Guitar. He impressed me with his intelligence. I was left thinking that if I found myself at a dinner table with him I would find his intellect rather formidable. I would eat my food in silence, doing my utmost not to attract his attention because anything that came out of my mouth would probably sound giddy.

I went to a musical event: Joni Mitchell songs translated into Irish. I thought the idea was interesting, but, given that I don’t understand Irish, the reality soon became rather boring. The singer had a gorgeous voice – well suited to Joni Mitchell’s style, but I quickly found myself wishing she’d just sing the songs in English.

The workshop I chose was The Art of Memoir because I’m working (floundering?) on a book about my years in Fiji.

The tutor, Michael Harding, is an accomplished writer of plays, novels, articles and – importantly - memoirs.

So, feeling that I was in safe hands, I attended his workshop in the hope that he might have some useful insights and advice to share.

It took four days of patient explanation by him on the single most important aspect of memoir for the penny to drop. This was on the day I was to read my travel essay at the festival.

Now that I understood the basic elements of what elevates a piece of writing from bad to good, I was in a panic. Was I about to blithely read a load of crap in front of a knowledgeable audience?

But it was too late for me to back out of the reading. Fearing the worst, I re-read my essay, scant hours before I was due on stage.
And there it was: the ‘device’ Mr Harding had been discussing all week. To my great astonishment, I had already been instinctively using the tools described by him. 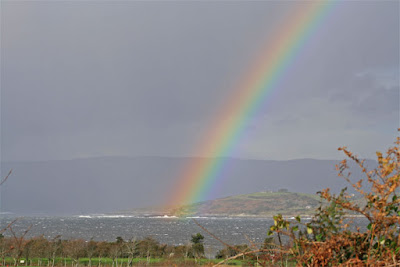 It is hard to describe my euphoria.

So, did I really gain from the workshop?

At the end of the workshop I told Mr Harding that if I ever succeed in getting the book published, I will name him in the acknowledgements!

p.s. I almost forgot – my first experience of reading at a literary festival was fine. I didn’t trip on the way to the podium, I didn’t stumble over my words, the audience laughed in the right places, and they applauded at the end.

Have you been to a literary festival? Have you experienced a lightbulb moment in your life - not necessarily related to writing?
I'd love to hear about it.

See you next week.