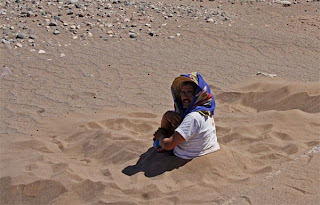 Whale Vertebrae on the Skeleton Coast

Following a question about the other whale bone - here's a photo of a whale vertebrae also taken on the Skeleton Coast, Namibia, with me in the shot to give it perspective. 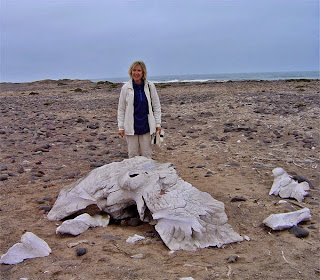 Strand Wolf on the Skeleton Coast

The Skeleton Coast in Namibia is one of the most extraordinary landscapes I have ever travelled through. I wrote a travel article for an English language newspaper in Spain, The Costa Blanca News, about my whole journey through Namibia. My travels along The Skeleton Coast inspired a short story too. Here is the link to the now sadly defunct Thrillers Killers & Chillers blogspot where the story was first published: 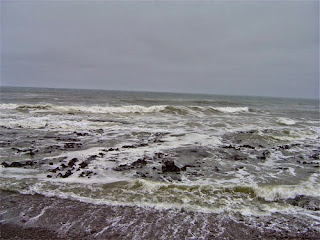 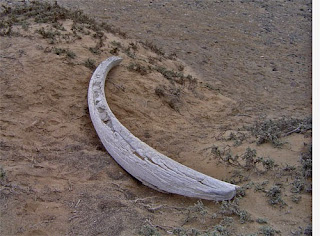 Welcome to my blog - a work in progress as I find my way.
In addition to travel articles, I also write short fiction in a variety of genres.
Therefore, in no particular order, here are a couple of little tasters of things to come.

This story was first published in the 2012 Daily Flash Anthology

Ka-boom!
Jurgen had about five seconds. He drove a piton into the ice and tucked himself under the pitifully shallow overhang. The avalanche roared.
Chunks of ice ricocheted off his rucksack, heralding the onslaught of snow. He fought against the formidable pressure; felt himself suffocating as the vacuum sucked the oxygen away. Head bent, he clawed his balaclava from his face, cupping the material in an attempt to form a pocket of air. Jurgen struggled as snow entered his mouth and nose. Now was not the time to panic. But he couldn’t breathe. He began to count. How many seconds before he would pass out?
The avalanche howled its frustration when it failed to pluck him from the face. The rumbles vanished into the abyss. Silence returned like a slap.
Coughing and retching Jurgen looked around his new bright world. He had survived. He punched the air in disbelief and yelled for no one to hear.
Then he sobered. He had lost precious time. The sun would set within the hour. He craned his neck to peer beyond the overhang. The avalanche had redefined the terrain. There was no time to negotiate a fresh route across the ice field tonight. He scanned his surroundings, hoping to see a suitable ledge where he could spend the night. Blank white nothing. Jurgen would have to bivouac right there. 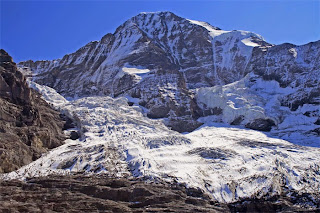 He checked the piton. It was still firmly driven into the ice and would hold him securely. He twisted his body to reach the rucksack and unclip his spare rope. It didn’t take him long to deftly manufacture rope slings to support his sleeping body. He found his last protein bar crushed in a thigh pocket. Jurgen chewed slowly, the impossible desire for a hot drink pushed resolutely aside. He checked the slings again before allowing himself to relax as best he could.
Of course Jurgen only dozed, but he was content. Tomorrow he would summit the mighty mountain. He felt elated that his first solo attempt hadn’t ended in disaster.
Night fell. In the snow-spangled sky, the moon gleamed, encircled by a corona of light like a halo. Jurgen stared at the halo and smiled in gratitude; truly he was close to heaven! He now slept, comforted in the arms of angels.
At daybreak the warming rays of the sun invaded his sleepy reverie. He imagined the light on his closed eyelids was the moon’s halo.
Jurgen was still smiling when the piton slipped from the melting ice.

The last thing Bert remembered was his wife scolding him. He always said she’d be the death of him.
'Good morning, Bert. Name’s and it’s my pleasure to serve. How d’you want to go back?'
'Back?'
'This new to you then?'
'Course it's new...'   Bert paused in astonishment.
smiled.  'This is my fourth death, so I’m on Allocation Duty. What’s it to be: guy or gal?'
'What?'
'I went back as a woman in 1840.  Spent a miserable life in domestic service. I tried to seduce my master to get a better deal, but I was so ugly I made Fungus the Bogeyman's wife look hot.'
Bert stared.
‘Or you could take a break from Life and return as a ghost.'
'I thought ghosts were lost souls, stuck in limbo.'
' has a lot to answer for.’ consulted his clipboard. ‘How d’you fancy ? I’ve got three babies being born in .’
‘This is so sudden.’
‘That’s death for you, Bert.’
‘I always wanted to surf.’
‘Now’s your chance. Male or female?’
Images of his wife screaming and snarling over monthly unmentionables, childbirth and the unfairness of womanhood flashed.
‘Male please,’ said Bert.
‘Good choice,’ said .
xxxx