I spent a month touring Morocco in a motorhome. An account of that road trip, Africa for Softies, was published in the Writers Abroad anthology: Foreign and Far Away.


The first big city on that trip was Fez. My husband and I spent many fascinating hours exploring - and losing ourselves - in the medina in the oldest part of the city. 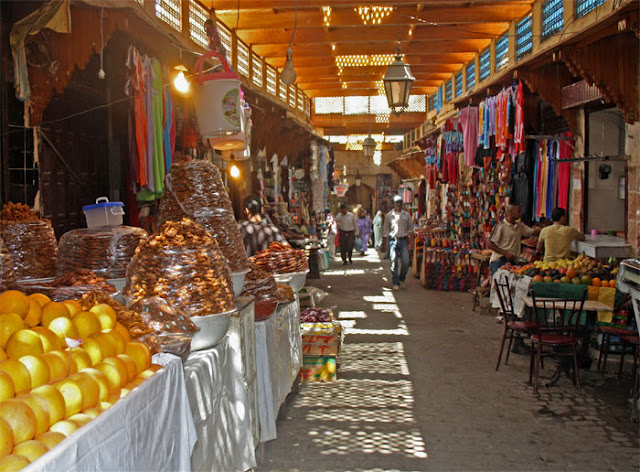 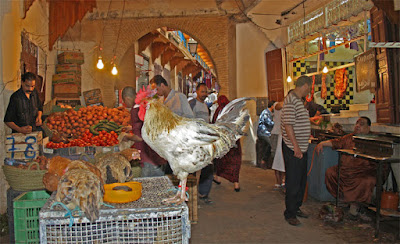 The sights, sounds and smells were all-encompassing and very, very evocative.
Fresh and dried fruits, vegetables and livestock jostled for our attention. 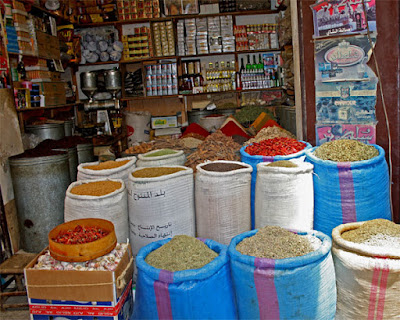 Spices and dried grains were on offer in huge sacks. The aroma from the spices was glorious.

And when the temperatures soared, we slaked our thirst with freshly squeezed orange juice from beautiful sweet Moroccan oranges. 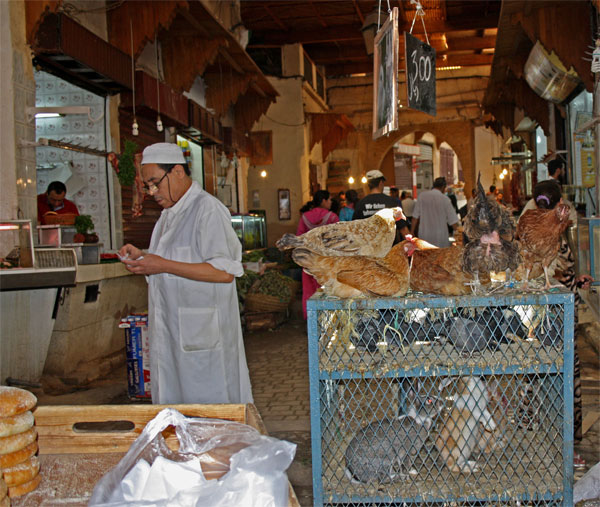 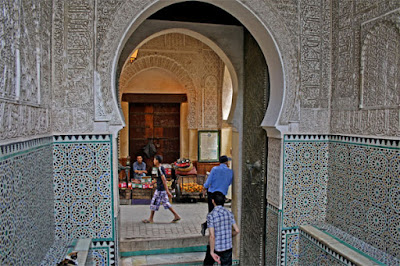 The architecture was something to behold too. 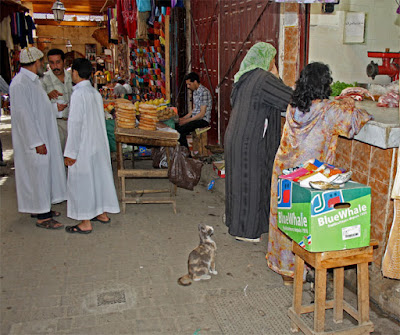 Every now and then, I'd see something to make me smile, like this little cat watching the ladies at the fresh meat stall.


All in all, Fez was a fantastic introduction to Moroccan markets. Next stop, Marrakech. 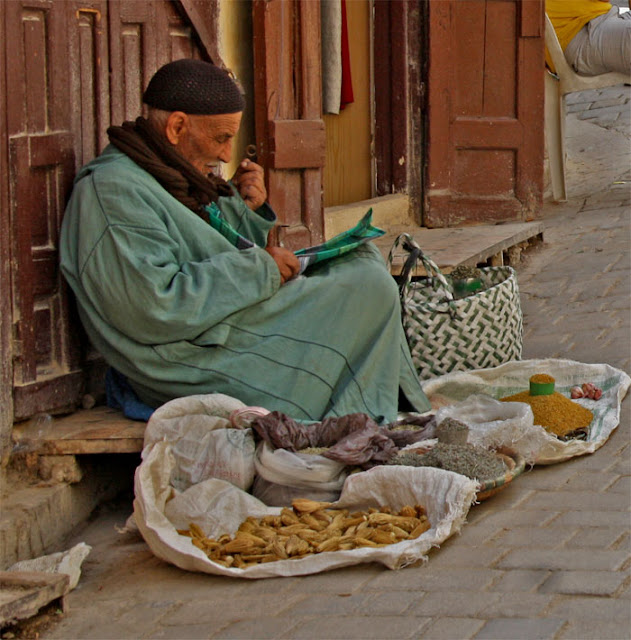 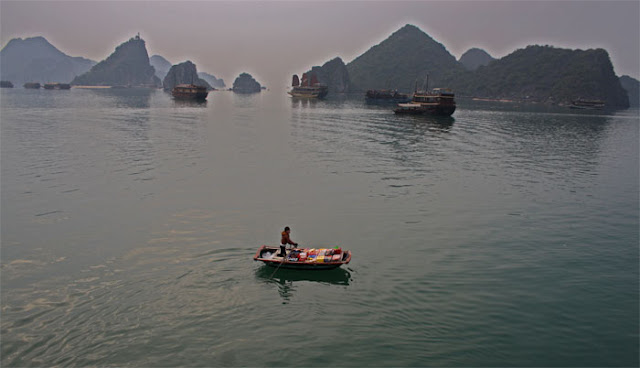 We travelled from Hanoi to Halong Bay for an overnight boat trip to see the karsts. It’s a world heritage site and the sight of hundreds of karsts rising from the water is amazing. The downside is there are far too many tourist boats and the waters of the bay are full of litter. 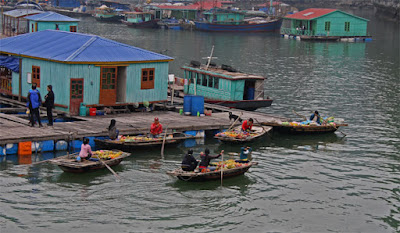 I was fascinated by the fact that the people of Halong Bay live in floating villages and, of course, travel everywhere by boat. 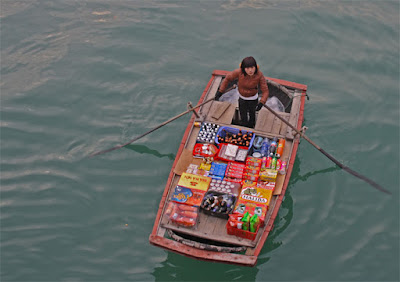 This also means that their market stalls are water borne.
It seemed as if every time we dropped anchor, a little boat pulled alongside to sell us their wares. 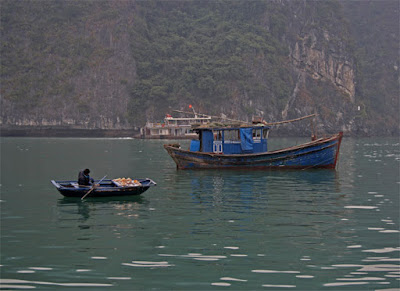 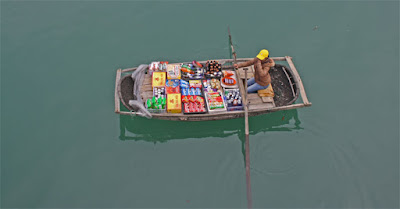 Unfortunately our boat captain took a dim view of this, although I’m not really sure why. We had paid for the ‘cruise’ up front so I couldn’t understand why he discouraged the floating market boats. 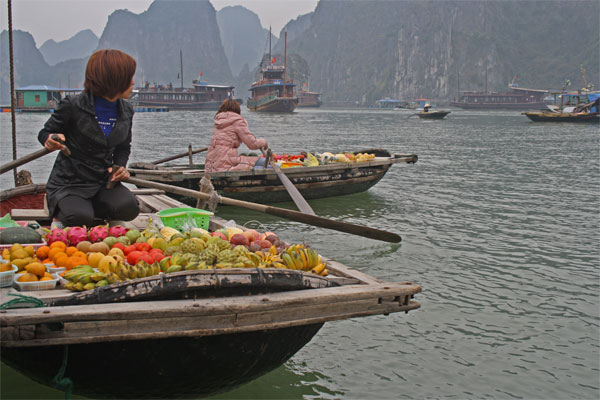 By way of protest, I bought fresh fruit from a couple of the ladies when the captain wasn’t looking! 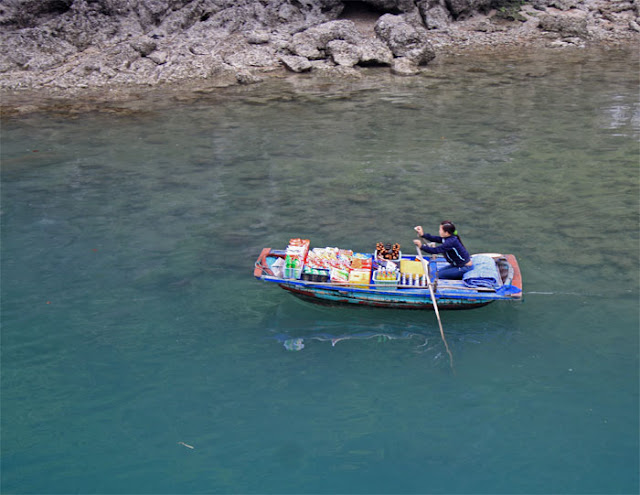 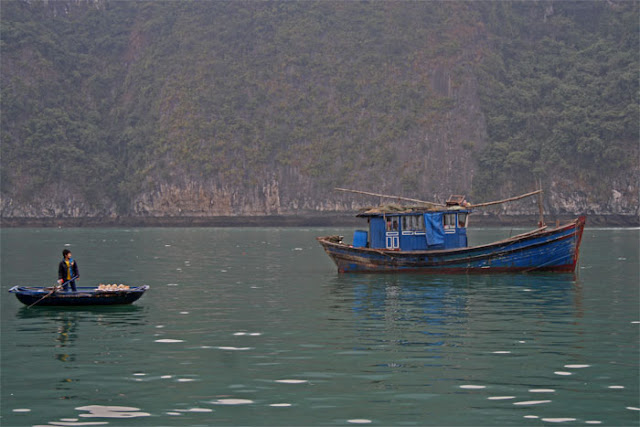 
The Old Quarter of Hanoi does boast a traditional indoor market, but the streets are full of hawkers and street vendors. It feels as if you’re exploring one big moveable feast. 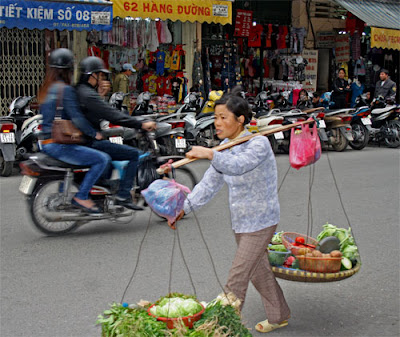 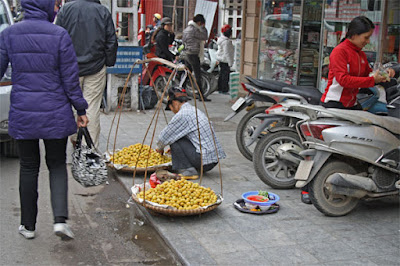 The narrow streets, flanked by dilapidated French colonial buildings, bustle with people on foot, mopeds, bicycles, cyclos (bicycle rickshaws) and cars. The mopeds dominate to the extent that they park on the pavements, forcing pedestrians onto the crowded roads. 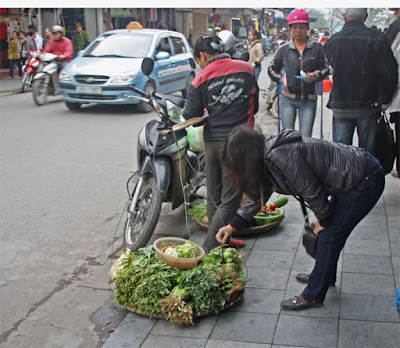 The vehicles sound their horns constantly. The cacophony is unrelenting and exhausting. To cross the roads you just have to keep walking steadily between the vehicles and hope they won't hit you: it takes a leap of faith the first time you do it but everyone knows the system and it works. 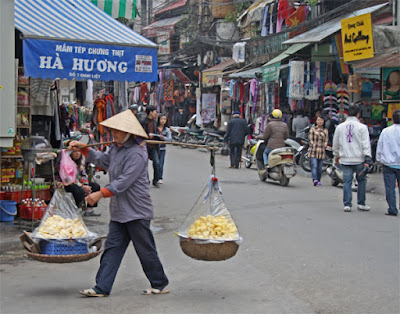 As you pick your way hawkers call and cajole. Did I want a rickshaw ride, a t-shirt that reads “Good Morning, Vietnam” or a piece of pineapple from a hawker in a pointy hat carrying baskets dangling from cane poles? 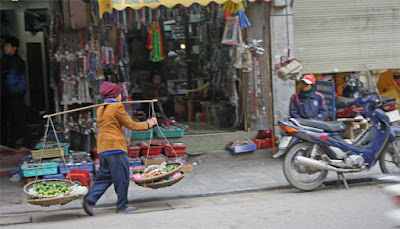 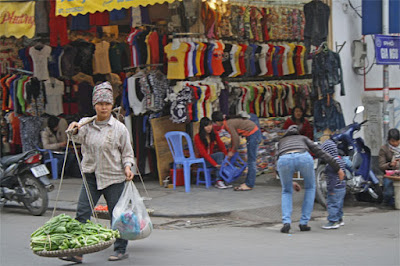 It was February and it was very cold. I knew Hanoi would be cooler than most of South East Asia but we hadn’t realised just how far north the city is. I was able to buy a jacket on a market stall but my husband couldn’t find anything to fit him; the Vietnamese are tiny. 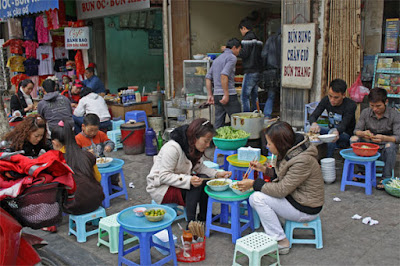 The locals eat on the streets in the Old Quarter. They sit on tiny plastic stools and use chopsticks to slurp soupy noodles out of big bowls. 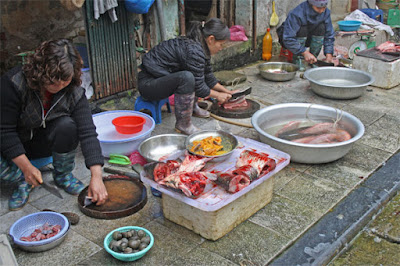 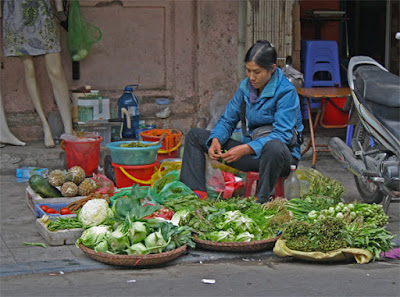 Some of the Vietnamese food choices on display are alarming for most western tastes. What we thought was the back end of a suckling pig turned out to be the back end of a dog. But we really drew the line when we saw a basket full of live toads… take your pick and they’ll prepare one or two for you on the spot. 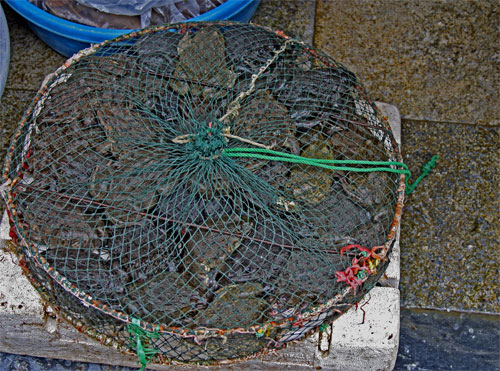 Story number 7 in my insect mini-series

It had been an exceptionally busy night, spent in the company of a virgin.
He had gone in search of a mate yesterday evening, working hard to attract female attention by rubbing his wings together – or stridulating if you want to get technical.
He rejected several plump females who responded to his calls, for the wily Armoured Ground Cricket knew that virgin crickets were slender little beauties.


Why a preference for a virgin? Because a first timer will mate once and lay her eggs, whereas the old pros mate and lay their eggs randomly. By sticking to the svelte virgins, he knew that a higher proportion of the offspring would be his.

When a slim young thing eventually turned up last night, he stridulated ardently and offered her his nuptial gift of a food sack together with his sperm pouch. She proved receptive and he carefully attached the spermatophore close to her genital opening.
Job done.
However, having lost around 20% of his body weight, he needed to replenish his energy levels. It was sunrise.
He staggered off in search of a meal. His appetite was eclectic, but he was partial to bird nestlings and headed across the desert scrub towards some likely looking shrubs.


In his weakened state, progress was slow, making him vulnerable. At almost 3 inches long, detection by predators was difficult to avoid.

The cricket climbed wearily onto a black rubber car tyre, perhaps in a bid to camouflage itself.
When the humans started to show an interest in him, he watched and waited. He didn’t have it in him to autohaemorrage again, but if that finger moved any closer he would unleash his final defence mechanism and vomit up his last meal all over it.