In my last post about Barcelona, I focused on Gaudi's remarkable architecture.

In this post I thought I'd focus on some of the sights that brought a smile to my face. 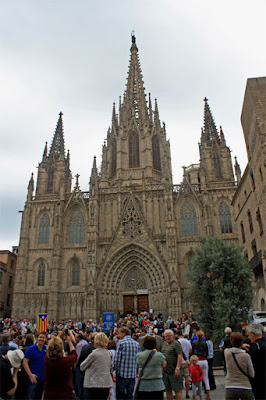 In front of the cathedral we were delighted to find a brass band playing and circles of people dancing.

The steps were sedate and I was somewhat surprised at the serious expressions of the dancers. 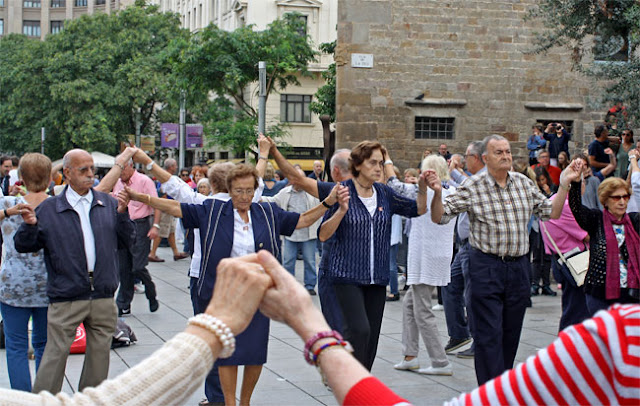 I learned that they were dancing La Sardana – the Catalan National Dance. This Barcelona Catalan dance is a symbol of Catalan unity and pride. Perhaps that was why the dancers looked so serious. 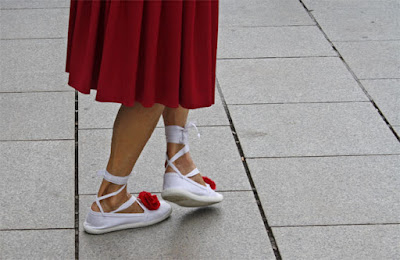 In one dancing circle, the ladies all wore traditional footwear. 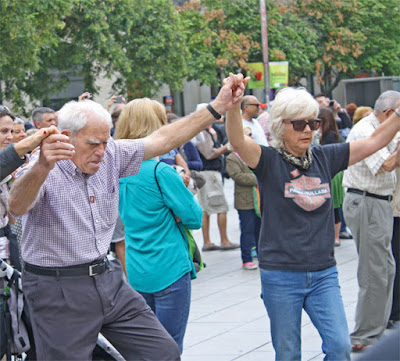 In another group, this elderly man's deep concentration caught my attention.


On another visit to the cathedral we encountered some entertaining buskers. 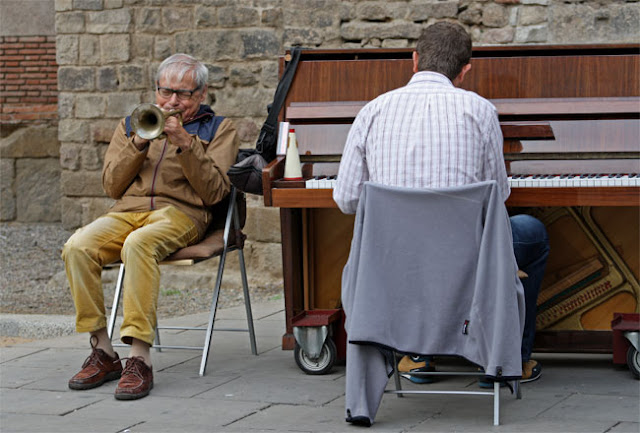 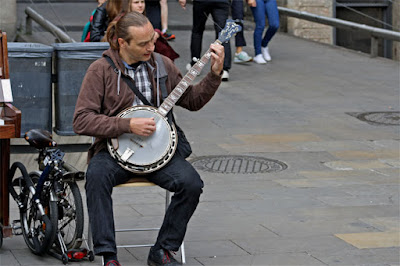 I'm a sucker for live street music and these guys were very talented. 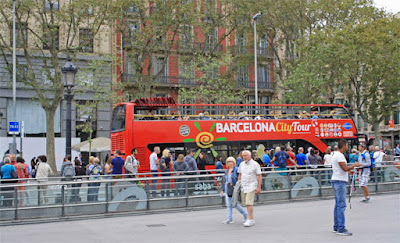 I sat and people-watched in the Plaza Catalunya. The City Tour buses were busy with tourists queueing.

Everywhere you look these days you see people taking Selfies. The manner in which some of them take their Selfies often give me a chuckle. 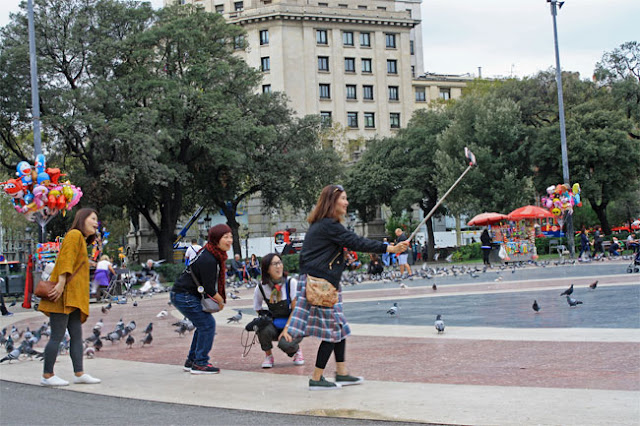 So there you have it - a small snapshot of the wonderful Spanish city of Barcelona. Do let me know if you've enjoyed this post and I'll see you in a couple of week's time. 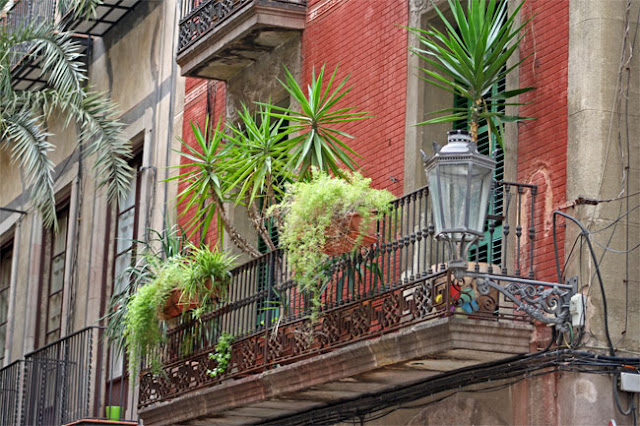 What does the city of Barcelona conjure in your imagination? For me, Gaudi features high on my list. 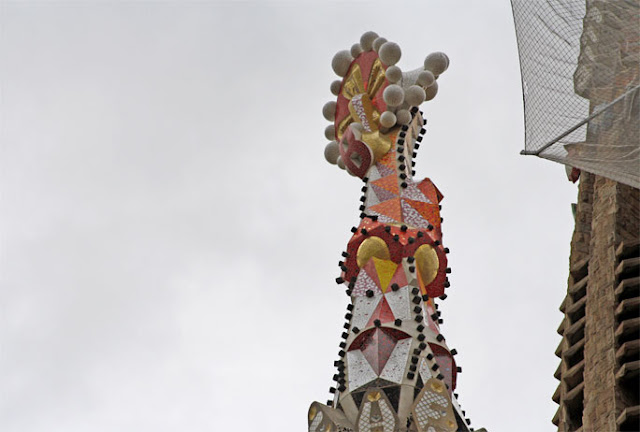 The Sagrada Familia - Gaudi's unfinished masterpiece - attracts visitors in their thousands. The building is certainly extraordinary. 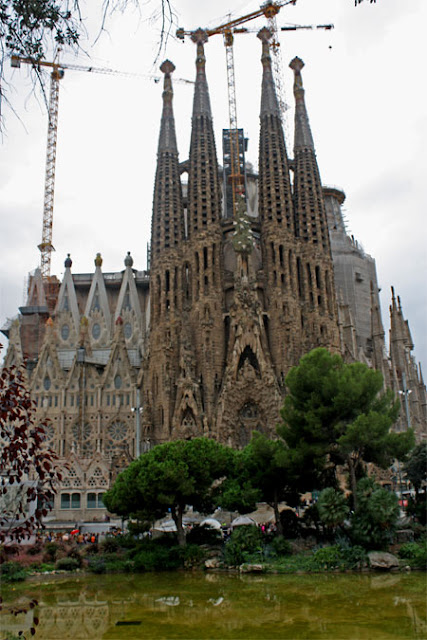 I was in Barcelona this week on a city break to enjoy a little sight-seeing. Whilst I knew that the Sagrada Familia is still a work in progress, I was slightly disappointed by the amount of scaffolding and builder's accoutrements which adorn the facade. 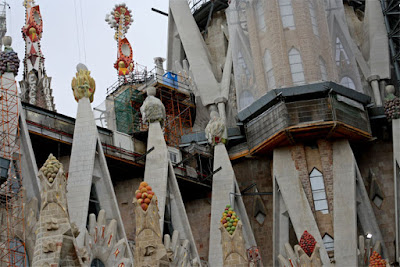 But there's no denying the complexity and uniqueness of Gaudi's imagination. 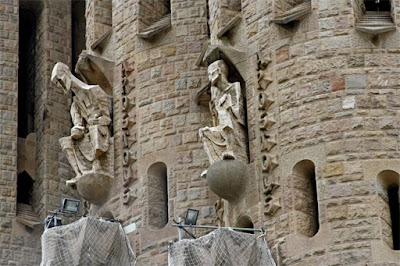 If you don't want to end up in a long queue, or even find the tickets are sold out, it's necessary to plan your visits to the big attractions in Barcelona in advance. This became a major obstacle for me. I didn't want to plan my visit that carefully. Spontaneity is very Spanish and something I prefer to embrace. Thus, I only saw the Sagrada Familia from the outside! 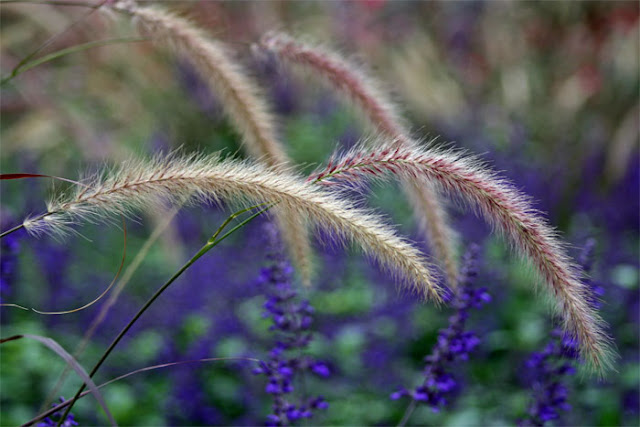 I hope you'll join me in a couple of weeks for more Barcelona images.

It had been an exceptionally busy night, spent in the company of a virgin.

He had gone in search of a mate the previous evening, working hard to attract female attention by rubbing his wings together – or stridulating if you want to get technical.

He rejected several plump females who responded to his calls, for the wily Armoured Ground Cricket knew that virgin crickets were slender little beauties.

Why a preference for a virgin? Because a first timer will mate once and lay her eggs, whereas the old pros mate and lay their eggs randomly. By sticking to the svelte virgins, he knew that a higher proportion of her offspring would be his.

When a slim young thing eventually turned up, he stridulated ardently and offered her his nuptial gift of a food sack together with his sperm pouch. She proved receptive and he carefully attached the spermatophore close to her genital opening. Job done.

However, having lost around 20% of his body weight, he needed to replenish his energy levels. It was sunrise. He staggered off in search of a meal. His appetite was eclectic, but he was partial to bird nestlings and headed across the desert scrub towards some likely looking shrubs.

In his weakened state, progress was slow, making him vulnerable. At almost 3 inches long, detection by predators was difficult to avoid.

The cricket climbed wearily onto a black rubber car tyre, perhaps in a bid to camouflage itself.

When the humans began to show an interest in him, he watched and waited. He didn’t have it in him to autohaemorrhage again, but if that finger moved any closer he would unleash his final defence mechanism and vomit up his last meal all over it.

I hope you enjoyed this latest offering - do leave a comment me. See you in a couple of weeks.