I spent a month based on the island of Negros in the Visayas region of the Philippines.

After the trip I wrote an article titled: Meeting the Locals which was published in Paradise Magazine - Air Niugini’s in-flight magazine.


Here is an edited extract about my visit to a market: 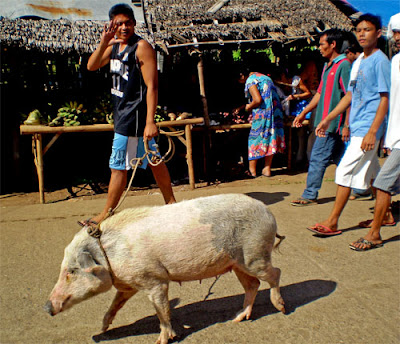 About 20 kms along the coast from the town of Dumaguete is Malatapay Market. This market is unusual in that the buyers and sellers still use a traditional barter system; although I did see money changing hands too.

Farmers, fishermen and housewives from surrounding villages and the interior of Negros flock to Malatapay every week to do business and socialise. 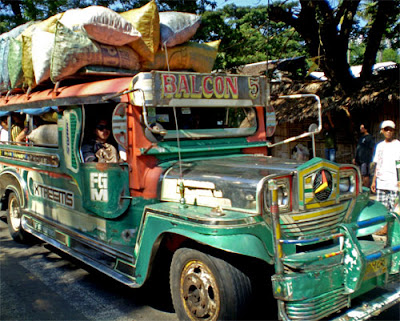 The livestock section was not for the faint hearted. As we approached the enclosure a strong smell of dung assailed us.

Water buffalo, goats, pigs, horses and cows were tethered to fences or vehicles. We picked our way through dung and slick mud to a cacophony of lowing, bleating, squealing livestock, belching vehicles and human shouts. 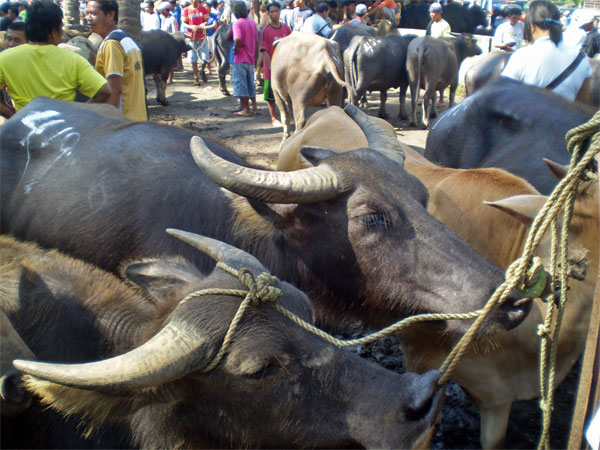 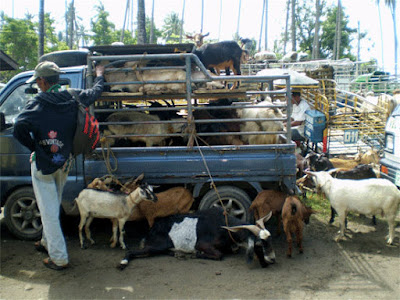 Pigs were being carted off – sometimes in sacks – squealing and struggling.

A hefty pig was showing great determination not to be loaded into a tricycle’s sidecar. He was pulling away so strongly, the men holding his ropes were sliding in the mud in a fierce Tug-of-War contest. We moved back from the action in case the pig won.


A big sow lay comatose and I thought she must be sick or dying. However she suddenly sat up with a shake that splattered mud in all directions and looked around perkily – she’d just been enjoying a wallow and snooze. 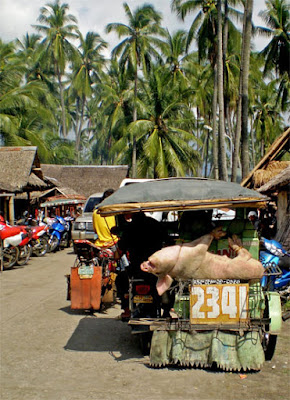 After a short wander we realised we were getting in the way of the serious traders. It was time to explore the rest of the market.

People were carrying bundles of chickens by their feet. The birds dangled quietly, seemingly philosophical about their fate.

We saw tricycles with cows, pigs or goats loaded into their sidecars. A particularly large pig was lying upside down on the back of a tricycle with his hooves lashed together. He was totally relaxed.

Along with stalls selling tools, clothes, fruit and vegetables, we found dozens selling seafood, from fresh trevally to tiny dried sprats. There were tubs of what looked like mashed up shrimps in a gloopy, slimy liquid – I didn’t investigate too closely. 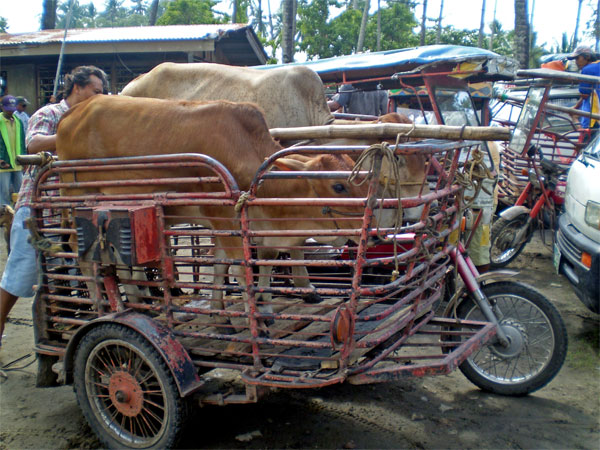 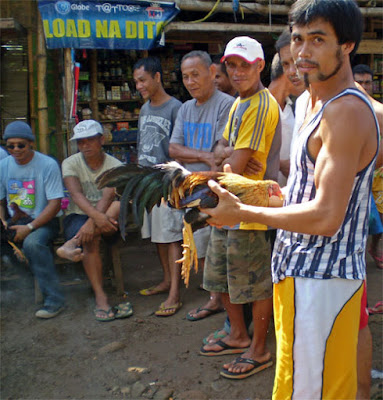 Cock fighting is popular in the Philippines.

We came upon a group of men. Some were stroking flamboyantly beautiful cockerels.

As part of their trading technique the men faced their birds up against each other for a brief scuffle to demonstrate the birds’ feistiness. I noticed that the men kept a firm hold of their charges to prevent full blown fights.

On our amble back we stopped to buy freshly fried banana fritters, generously sprinkled with sugar and served on banana leaves. We risked scalding our mouths as we bit into the delicious sweet, crunchy batter. 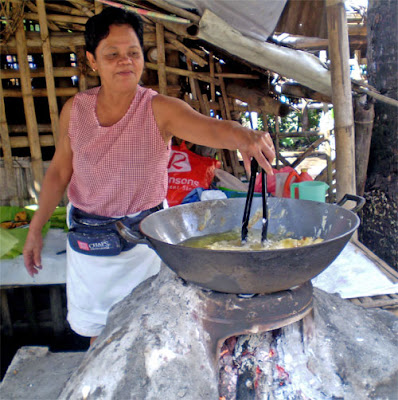 Plonk me in a foreign country, point me in the direction of a food market and you won’t see me for dust.

Local food markets are one of the quickest ways to get a vivid snapshot of a country. They give you the opportunity to see ordinary people living their lives. You see the type of foodstuffs they eat and you see how they interact with each other. In short, because the food market is there for the locals, not you, they give you a chance to mingle in a way you never can when you visit dedicated tourist attractions.

As a bonus, markets can offer rich pickings for fiction and non-fiction writers alike. I wrote a story called Sieving out the Weevils which opened with a scene at my local market in Fiji. The story was published in the 2011 Writers Abroad anthology: Foreign Flavours.

On my recent trip to Turkey, I spent a happy hour wandering around a small market in Kas in the Antalya region, marvelling at the beautiful fresh produce and drinking in the atmosphere.

I communicated largely by sign language with women selling herbs and salad leaves and a lady with a bubbling pot of corn on the cob. I watched a woman spooning a thick white substance into plastic bags which she weighed for her customers. Noting my curiosity, she gave me a small dollop to taste: it was yogurt – thick, fresh and very sour!

I feel another mini-series coming on...

Here is story number 6 in my insect mini-series


Sometimes nest guarding was positively boring. He patrolled the area around the mound: turning this way and that, scuffing through the loose dirt and dry vegetation which disguised the nest entrance. Nothing. Nada. Not so much as a whiff of an intruder for him to ward off.


He wished he was a hunting ant instead of a guard ant. Whilst 20mm long was substantial for an ant – indeed Giant Red Bull Ants were one of the largest ant species in the world - he simply wasn’t large enough to hunt. At an impressive 25mm long, his fellow hunting ants surpassed him.

He itched for a bit of action to liven up his day.

With his excellent vision, he spotted something approaching the nest. It didn’t occur to him that the intruder might be too big for him to take on.

A foraging Purple Swamphen searched the ground for snails and frogs, flicking its tail up and down as it walked. Fast and aggressive, the guard ant raced towards it. He raised his mandibles in readiness to attack with his highly developed sting. As the bird moved towards the nest he closed in.

Unfortunately the attacked swiftly became the attacker in a lighting strike that cost the ant a leg and mangled one of his antennae. He managed to retreat to the safety of the nest before the bird finished what he had started.

Moments later the Giant Red Bull guard ant emerged again. Injured or not, he was hard wired to guard his Queen. But the Purple Swamphen had moved on. He resumed his patrol and found that five legs worked almost as well as six. 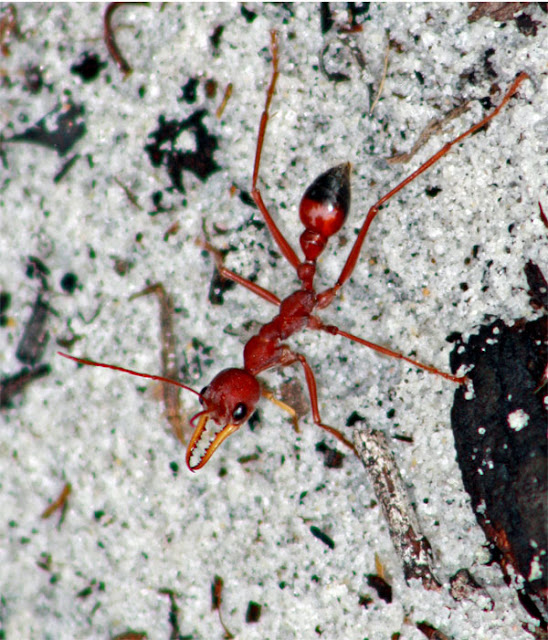 A few years ago I travelled around South Africa.
While I was in Cape Town I took the ferry to Robben Island and met a man called Ntoza: an experience I will never forget.

I described the tour of Robben Island in an article I wrote for an English language newspaper in Spain.

Shortly after the death of Nelson Mandela I wrote a story based on my experience which was published on the Cafe Lit website.

You can read the story here